The Beginning of The Tale

The Sunbeam Tiger owes its existence to the foresight of two men, Ian Garrad and Carroll Shelby. Ian Garrad (the son of the then Rootes Competitions Manager) had long felt that there was an excellent market for a high performance Sunbeam sports car to supplement the capable Alpine. 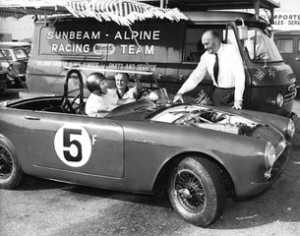 As all Sunbeam Tiger owners know, Sir Jack Brabham was in on the ‘ground floor’ of the Alpine to Tiger concept. While that genesis remains wreathed in myths, according to Ian Garrad ….” Jack Brabham, Bruce McLaren, Ken Miles and others had just driven Alpines in the Endurance 3 Hours invitation race at the ‘Times Grand Prix’ Riverside meeting of October 1962, which also saw the debut of the 260 Cobra. Later that day Jack and I were ‘bench-racing’ when the possibility of stuffing a V8 into an Alpine was broached by Brabham”. Whatever the absolute truth is Sir Jack Brabham’s views moved forward the eventual development of the Sunbeam Tiger.

Ian then turned to Carroll Shelby to help make reality the dream of a Sunbeam sports car with sufficient power to compete with E types, Healeys and Porsches. Garrad believed the answer lay with installing Ford’s 260 cu in (4.2 litre) small block V8 engine. It was compact and had potential for enlargement, and was soon increased to 289 cu in. (4.7).

In March 1963 Shelby was retained as engineering consultant on how best to fit the Ford V8 into the Alpine chassis. The product of Shelby’s commission was delivered to Ryton for Lord Rootes to inspect in July. From his go ahead it took only nine months to bring the code named ‘Sunbeam Thunderbolt’ to the New York Motor Show in April 1964. However, by the show date the ‘Thunderbolt’ had been named the ‘Tiger’ in memory of the 1926 Sunbeam Tiger, a supercharged V12 that set the world’s land speed record of 152.3 mph in 1926 in the hands of H.O.D Seagrave.

Early illustration of a development Tiger

Rootes did not have the manufacturing capacity to build the Tiger so Jensen Motors at West Bromwich was engaged to carry out the series production of the Tiger I and II. During its production run, some 6,550 of the 260 cu in MK1 Tiger were produced between 1964 and 1966. Only 536 of the 289 cu in MKII Tigers were made in 1967 and all but 10 were made for export markets. In June 1967, by which time Chrysler had achieved full control of Rootes, Tiger production was ended but not before a paper based attempt to modify the hybrid they inherited by installing one of Chryslers own V8 engines was proved to be impossible! It is unfortunate that a corporate take-over brought about the demise of the Sunbeam Tiger. © STOC 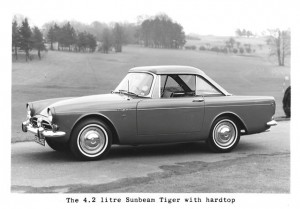